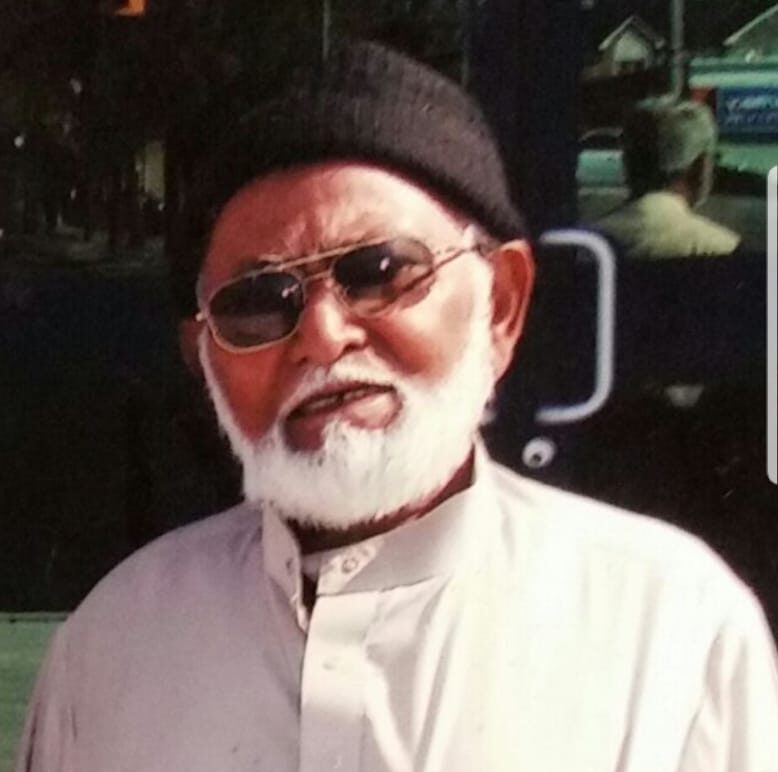 My grandfather was born in December 1932 in the month of Ramadan in Tadkeshwar Surat. He was a farmer and used to pass his time fishing and mediocre work such as farming, business, etc and then moved to the tiny island of Grenada in 1973 and worked as a coolly man (salesperson). He was among the first Muslims in Grenada and struggled due to poverty. My mother mentioned that he used to sleep on cardboard boxes as he didn’t have much to his name.

In the 80s, he migrated to Canada but became ill and headed back to Grenada only to return back in 1988 after his children and family moved to Canada. He lived near Donlands and later moved to Markham and Lawrence as the rent was cheaper.

When one thinks of my grandfather, they immediately associate him with his love and commitment for Abu Bakr Masjid and his deep passion for fishing and helping animals and people alike. Since the early days of SMA, he was an instrumental personality in anything and everything to do with the masjid. He used to busy himself with day-to-day work, cleaning, and selling, uplifting the spirits of the young and old, and most notoriously him standing at the masjid exits screaming “MOSQUE FUND” week after week collecting money for the masjid. Most madresa kids from those days often relate how he used to keep his pockets full of candies and would share it out with the children. For the last 8-10 years of his life, he worked at the masjid free of charge, commuting daily by bus and spending long hours in the house of Allah.

He became sick with Adenocarcinoma which is a form of lung cancer and would go for radiation treatment and head straight to the masjid after it. Towards the end of his life, when a few masjid members came to him to pick up the masjid keys, he was reluctant to give it as his only hope at that time was to see the completion of the masjid which unfortunately he didn’t. His love for the masjid was so deep that when his friends begged him to come to India (he never returned after he initially left), he stated that he would only come once the masjid construction was completed.

Ever since India, my grandfather was very fond of fishing and something which his grandchildren inherited and continue till today. He continued his passion for fishing once he migrated to Canada and used to religiously go until he became diagnosed with cancer. Interestingly enough, he never ate fish so would catch and distribute it to families and friends. He was an animal lover at heart and besides fishing, his passion was taking care of birds. I remember growing up watching my grandfather rescue injured pigeons only to nurse them back to health by feeding and caring for them which would at times take several months. He once found a white injured baby pigeon and brought it home to take care of until it was fully grown. Even after his death, you would find this pigeon flying around 45 Greencrest Circuit in Markham and Lawrence.

Nakhuda Chacha was very profound in reading, especially history and poetry. He was an admirer of Allama Iqbal and recently, the family discovered in his diary, pages upon pages of his own poetry in Gujarati which according to my aunt, have deep meaning and reflections for those who understand.

There’s a hadith that mentions giving charity with the left hand so the right-hand doesn’t know the meaning in secret. My grandfather was the epitome of this which only came to surface to family and friends once he left this world. After he passed away, a lady came to the masjid and inquired where chacha was and after learning of his death, broke down crying. When asked who she was, she mentioned that she’s been coming to the masjid for years and it was chacha who used to help her financially. At his grave years after he passed, a man approached my uncle and narrated that when he was younger, he was going through a lot of difficulties which my grandfather knew, and gave him $1000 to help him get back on his feet. In Grenada, he used to help a non-muslim lady every Sunday without anyone knowing, and after he came to Canada, she came to look for him and that’s when people found out about his charity. He would also bring home a bundle of bananas in Grenada and hand it outside the house for anyone to take, stranger or friend. These are the stories we knew of but I can only imagine the impact he had on people that will never surface.

His joyful personality is reflected in a story often narrated by Moulana Abdur Raheem from the UK. Once while at the masjid, a call came in to request someone from the masjid to come to the hospital to pray on a newborn. He looked around but no Moulana was present so he decided to go himself. When he arrived, he gave the azan and iqama in the babies ears. When he finished, the parents said he made a mistake and accidentally gave the fajr azan to which he jokingly replied, your baby now won’t miss fajr salah.

Before his death, he went into a coma and was hospitalized. I would spend my nights along with my uncle by his bedside reciting or playing Quran. Hundreds of people of all ages and ethnicities would come to visit him and after mashura, my family decided to move him from Sunnybrook to a hospital in Scarborough so as not to inconvenience people in traveling. It was the morning of the 20th fast of Ramadan (September 10, 2009) when doctors informed us that he is in his final stages. While in a coma, not having moved a muscle for weeks, we immediately started to recite the khalima and as I poured Zamzam down his mouth, his lips started to move but no words. It was at this moment that Nakhuda chacha returned to his Lord.

After his death, numerous people for years on end continued seeing him in their dreams. A dear friend and masjid member narrated a story to my father and I about seeing him a plethora of times. On one occasion, he dreamt of seeing my grandfather sleeping in the masjid office and asked him what he was doing there to which he replied that he comes every day. The person narrating the dream asked him to give his salaam to the Prophet SAW and my grandfather said yes, I see him every day.

My grandfather was a simple man but gained a beautiful death and a rich legacy after his demise. When reflecting on this, I’m most certain that his selfless servitude to the house of Allah and to the people and animals is what made him successful. When we look back at those in recent times, we notice that anyone who serves the masajid or people for the sake of Allah ﷻ are often favoured by Allah ﷻ such as Major Abbas Ali, Chota Uncle, and Bakharia Chacha.