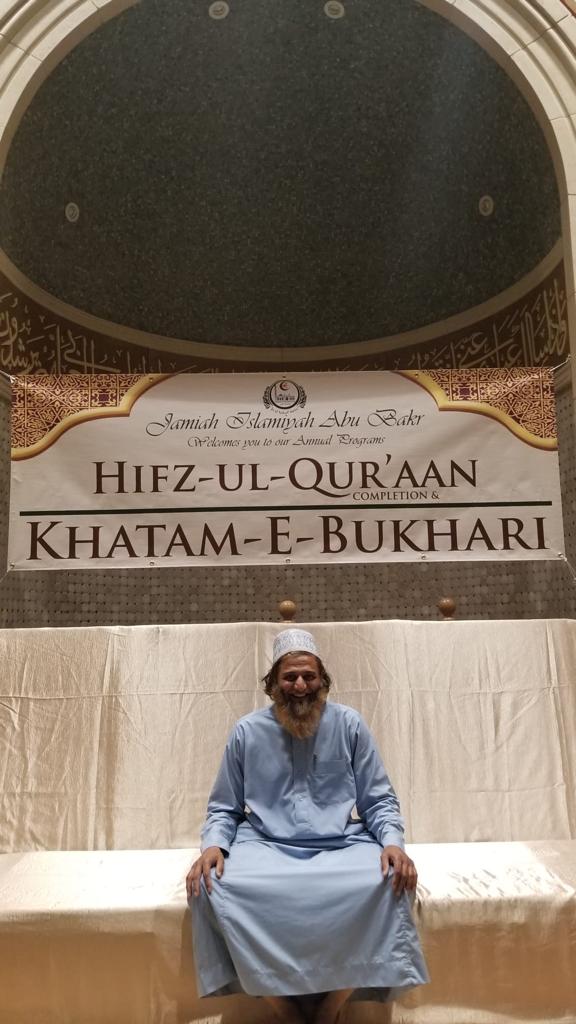 If the people knew (the reward of) pronouncing the Adhan and for standing in the first row [in congregational Salat (prayers)] and found no other way to get that by drawing lots, they would draw lots… [Sahih Bukhari]
The Mu’adhdhineen will have the longest necks on the Day of Resurrection.” [Sahih Muslim]

Need help with burying your deceased relative? Call Bawa.
Need to set up a new machine/system in the building? Call Bawa.
Gotta sanitize the entire building? Call Bawa.
Got an inspection coming up? Call Bawa.
Need to fix any problem regarding anything in Jame’ Abu Bakr Siddique Masjid? Call Bawa.
Plumbing issues? Need an electrician? A janitor? A caretaker? A volunteer, cook, driver, labor? Call Bawa.
Need help? Call BAWA! What time is it? Does not matter! Just call BAWA!
The list goes on and on. To such an extent, that sometimes we’ll marvel at the fact that ‘Bawa’ is actually the name of one single person. That’s right. Not an entire company. Just a one-man team: Arif Bawa.
With the absence of his father for almost his entire youth, this made him even deeply engrossed in ignorance. No new movie or show was missed by him and his group. Friendships with gangsters of the city…… all this was due to money sent by his father and which came with no accountability.
After coming to Canada, and witnessing how hard his father was working and how he kept his children happy by working very hard, he finally thought it was time for a change and thus decided to help his father. Both father and son worked in a company together. Later on he would get an opportunity to clean the masjid. Frequently attending the house of Allāh, finding inner peace after coming into the Deen, coupled with his cleaning job which would intimately become a means of khidmat. Some would even argue that the entire time our masjid was under construction, he did khidmat without procuring a dime.

Bawa was a big fan of SANJAY DUTT-a a very popular Indian hero. Sanjay Dutt was known as Sanjay Baba. People used to call him Baba because of that. Which turned into Bawa by the people. Luckily it didn’t change to ‘Biwi’. 😉
For anyone who’s ever visited one of the biggest masaajid in the Scarborough area, and heard the Adhan, then you’ve probably heard it from one of the longest-reigning Mu’adhins in the city. Yes, Arif Bawa is his name. So adhaan needs to be made? Call Bawa? Nope. He already delivered. Hayya ‘alal Falaaah!
Description? Tall and handsome, with long, wavy hair and a lot of orange in his beard, rocking a long thowb with a matching topee, praying right behind the Imam. That’s exactly where you’ll find him, and that’s his spot.
Born in Bharuch City, Gujarat, India in 1972 and having migrated to Canada in 1995, Bawa has dedicated much of his life to the service of the house of Allāh for the last twenty-five years.
With a great concern for literally anyone and everyone entering that masjid, Bawa has been a tremendous help to our community for decades. One of his greatest traits, coupled with all the tremendous service he continues to provide the Jame’ Abu Bakr Siddique Masjid community from before Fajr till after ‘Ishâ literally every single day of the year, is the smile with which he does it all.

Why Jame’ Abu Bakr Siddique Masjid?
“When l came to perform my first ever Jumuah salah at the old SMA building with low elevation like the masaajid back home- I was greeted and welcomed by my people which is scarce when out of your home country. I felt back at home despite living in a western country, which obviously attracted my heart towards the SMA. When I came to Jame’ Abu Bakr Siddique Masjid, I would feel peace and contentment in my heart. Back home, university life as a youth was healthy with many friends, but our circle was always attached to the Masjid. Always getting together for salah and hanging around by the door gate, volunteering in the Masjid, carpet cleaning, and even digging graves. After feeling so welcomed and homey, that’s when I started getting involved in Masjid activities. I started off by giving the adhaan; then cleaning; then maintenance; then BBQs. And with time, came more and more new challenges. I didn’t realize how quickly twenty-five years of my life had gone by in Canada. It’s become my home country through the blessing of Jame’ Abu Bakr Siddique Masjid. Alhamdulillah,” says Bawa himself.

As one of the employees at the SMA would recount, “I’ve never once seen him upset, angry, or even raise his voice!”
Whether it be picking up a deceased body from Niagara Falls, or fixing something on the roof in 25 degrees below zero weather, or guiding a member of the community on where they may be able to solve their issue, or adjusting the sound system, or fixing a leaking tap.

Despite the heavy load of work, the constant demand from every corner, the nonstop phone calls, the management’s requests, his fellow employees’ appeals, the community seeking his help, Bawa will never fail to deliver. He says, “We are here to work for Allah, when we are gone, Allah will raise someone else to do His work!”
Sometimes we think it’s probably for selfless people like him that Allāh continues to help our communities.

His advice for the youth: (actually, after speaking to him myself regarding the degeneration of the youth) he’d rather advise the parents. If they’re sincere with Allāh, and do their part, from an early stage in their life, hopefully the rest should be taken care of.

May Allah ﷻ bless Br. Arif with a suitable reward in this world and the next.
So next time you’re by the Midland and Lawrence area, and hopefully not in lockdown season, and gotta catch the next prayer, you know exactly where to find this special, chosen servant of God. 2655 Lawrence Avenue East.
-Written collectively by brothers at SMA