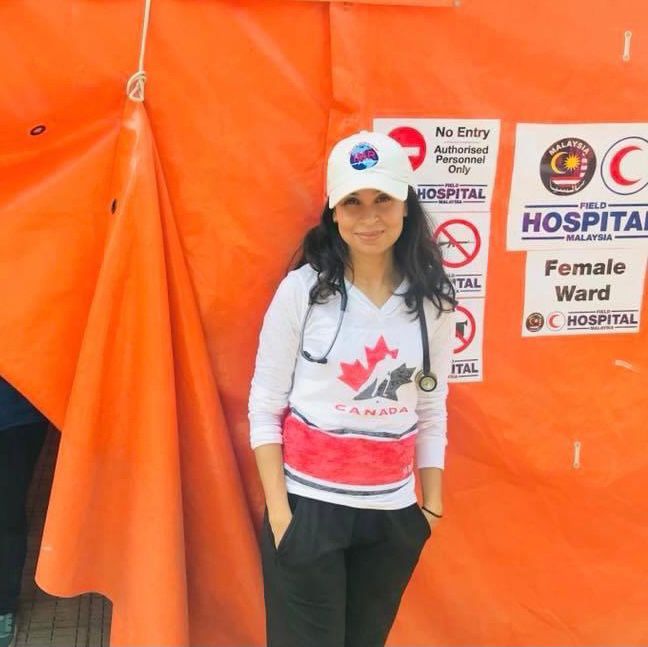 Dr. Fariha Khan is a wife, a mother to 4 young boys, and a family doctor in Peel Region. She is a skilled physician, who balances her career in medicine while being deeply involved in the Canadian Muslim community. She is a teacher, mentor, and role model to many, and in particular, young women in the Muslim community.

Dr. Fariha was born in the heart of Toronto, to immigrant parents who came from India in the 1960s, with the hopes of a good life for themselves and their children. Fariha attributes much of her qualities of work ethic and perseverance to witnessing how her parents worked hard and the importance they placed on education.

She attended middle and high school at Havergal College in Toronto, then went on to the University of Toronto where she obtained a Bachelor of Science degree. She then went on to McMaster University where she earned her Doctor of Medicine Degree, which was followed by her residency training back at the University of Toronto. She had her first son in 2007, just 6 months after starting her medical career. Her career has been blessedly interwoven with 4 maternity leaves! While raising young children with a career in medicine can be a challenge, Dr. Fariha feels immensely grateful for the way in which Allah has put barakah in the timing of all aspects of her life.

Dr. Fariha recalls having a natural inclination to the sciences from a young age. She was always fascinated by nature and animals and always gravitated towards the biological and physical sciences as a young student. Her mother was a physician, and growing up, she recalls spending a lot of time bouncing around with her mom as she worked in clinics and delivered babies at the hospital. She was inspired by her mother and her uncle who was a surgeon in India and could see that medicine was a career that offered her the challenge of continuous change, lifelong learning, and fulfilled her fascination with the sciences. All along though, humanitarian issues struck a chord with her, even from a young age. She recalls the Ethiopian famine when she was just a young girl around the age of 5, and then the Bosnian Genocide when she was in elementary school. She always knew that somehow, she wanted to use her skills, strength, and voice to serve people, even beyond medicine.

When Dr. Fariha was a medical student, she travelled back to India during her training each year, to learn and to provide support to local hospitals and poverty-stricken areas. She had her first child shortly after her residency and over the years became quite preoccupied raising 4 young boys while balancing her career. Interestingly, instead of slowing down, she took on the challenge of volunteering with an organization AFTER she had her fourth child!

Dr. Fariha was offered to join the Board of Directors with Islamic Relief Canada in 2013 when the organization was just starting to grow. MashaAllah, the organization has grown over the years and this growth is in large part attributed to the work she dedicated herself to in those early years. She is immensely grateful to the people who supported her leadership there and the invaluable learning in her time there. Dr. Fariha was not one to simply attend meetings or sign off and rubber stamp. She was always one to roll up her sleeves and dive into the work. She has visited many of Islamic Relief’s projects globally and feels humbled by the many beneficiaries she has met in her time with the organization.

She has since grown into other exciting roles! She is currently on the Board of Directors with the National Council of Canadian Muslims, which is taking head-on, the very challenging issues of islamophobia, hate, and racial discrimination. She is also currently on the Board of Directors with the Islamic Medical Association of North America, an organization she has served with for many years joining medical missions in other parts of the world. Currently, IMANA is raising funds for the covid relief efforts in India. She credits her work with IMANA as bringing her particularly close to the cause of the Syrian and Rohingya refugees.

Dr. Fariha is particularly excited about her newest role, having joined the Advisory Council of UNHCR Canada, she is now the Chair of the Islamic Philanthropy Council of UNHCR Canada. This, in her mind, is a true success story for the global Muslim community. To have a high a level organization such as the UN develop a program that bridges the needs of Muslim refugees, with the support capacity of Muslim donors is remarkable. And to develop a sound Zakat program through the guidance of Muslim scholars within a non-religiously affiliated organization is quite a feat!

Dr. Fariha has also served on the Board of Directors of Naseeha Mental Health, the public policy committee of the United Way Peel Region, and has supported numerous community organizations behind the scenes. And let me remind you, Dr. Fariha is also a wife with 4 kids.

When asked what are the main lessons she has learned in life, Dr. Fariha believes there is still so much more to learn. She has seen a lot, working as a doctor, in the pandemic, as well as her work as a humanitarian. Her mission always is to preserve and restore dignity to those who suffer. She has learned over time that she might not be able to resolve all of the difficulties that people experience, but that there is always a role to ensure that people are supported, that their suffering is witnessed, and that they are advocated for. The pandemic has made it more evident than ever, that issues of justice play a role even in the practice of medicine.

Life in general, and her various experiences have taught her lessons, that she feels she is only really now starting to truly understand, at the age of 40.

She reminds herself of the following: Do more good and less harm. Your Parents, your parents, your parents, Jannah lies at the feet of your Mother and your Father’s prayers for you are always answered. Don’t turn a blind eye to injustices and impoverishment that you see and feel helpless against. Fight in whatever way you can, because the opposite of poverty is justice, not wealth. And when the battle seems it is being lost, remember that Allah is Most Just and is the Best of Providers. She prays that she always has enough energy, capacity, and hope to help the people and parts of the world that hurt. Remember always that this entire life is really just ‘part of a day’ and inna lilahi wa inna ilayhi rajioohn. In every single way, we return.

The simplest and most important rule she tells herself when approaching an act or opportunity or undertaking a task is to only do so if she can say Bismillah at the beginning and if she can say Alhamdulillah at the end. And if one can begin in the name of God, and end in the Praise of God, then hopefully everything that happens in between is good and right and pleasing to Allah.

We thank Dr. Fariha Khan for her generosity, leadership, humanitarian efforts, and push for social justice and equality all around the world. We hope her story will touch everyone and inspire the next generation of females all around the world. May Allah ﷻ preserve Dr.Fariha and reward her for her efforts. Ameen.