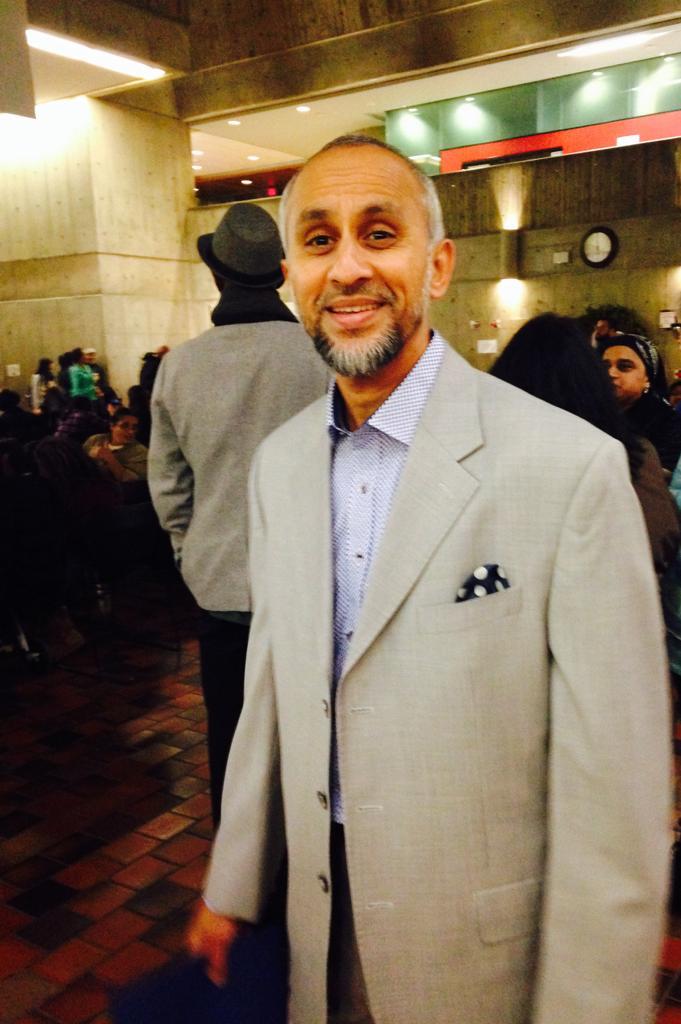 Brother Firaaz Azeez, or as he is well known, Brother Firaaz, is a man of many talents. Brother Firaaz has been a constant in the Toronto and Scarborough Muslim community for two decades. His commitment to community work starts with his inspiration; his father, Imam Mohammad Azeez.

Brother Firaaz was born in Guyana and immigrated to Canada at the age of 12. It was in Guyana that he got his first taste of community work with his father, as he was often seen being carted around on his father’s bicycle to help others in need and perform imam services. To this day, West Indian Muslims in Toronto joke about “little Fir on the bike.” Brother Firaaz ditched the bike many moons ago but the passion his father instilled in him for community work stayed. Imam Azee was Imam of the Sunnatul Jamaat mosque for over 20 years since coming to Canada in 1979, which in turn had Firaaz growing up in the masjid. He reminisces that “the masaajid were the hub of the community, where everything happened,” which is something he never forgets to this day.

Brother Firaaz went on to study at UofT and immediately started working in the banking sector. He quickly climbed the ladder in his field due to his ability to communicate well with others and his compassion for clients as a financial advisor. While working as a financial advisor in the late 90s and early 2000s, he had a successful career, but he saw the lack of Barakah in the money. He had the “Dunya success” but something was missing. So in 2003, he stepped away from his financial sector career to fully immerse himself in community work.

At this time, if you went to any event at the Islamic Foundation of Toronto, Brother Firaaz had his hands on it. He worked alongside then-Imam, Shaykh Hussain, on the Youth Tarbiyah Conference, the first youth targeted conference of its time. He was also a major driving force behind starting the Hot Soup Kitchen at IFT, in 2005, which is still active to this day. Brother Firaaz saw that food banks only reach a certain demographic of people, and with the Hot Soup Kitchen, they could provide a nice, sit down, hot meal experience every weekend for whoever could attend.

Brother Firaaz also started coaching in the Islamic Soccer League, in the Malvern community, and still sits on the board to this day. Through these years of living and volunteering in Malvern, he never passed on an opportunity to volunteer with Major Abbas or “Uncle” as he knew him, at the Muslim Welfare Centre. Brother Firaaz has was involved with MWC since 2002 and took on a staff role in 2013 to ‘tell the story” to the wider Canadian public and amplify the brand as a nationally- recognized humanitarian organization. During his time there, he launched and spearheaded many programs, including Regent Meals – providing hot meals to the Regent Park community, Malvern Eats in northeast Scarborough, and the Arctic Food bank in Inuvik, Northwest Territories.

Last year, Brother Firaaz stepped away from the Muslim Welfare Centre to embark on his new journey. He took the helm of @Humaniticharity, a grassroots nonprofit supporting vulnerable families and empowering communities. Founded on the principles of Compassion, Sevice and Collaboration,  the organization works with local partners and international NGOs in the critical areas of food security, education, emergency relief and development. With 4 million people in Canada experiencing  food insecurity/hunger, Humaniti is invested in the food projects to address this growing pandemic. It launched launched the “Share A Meal” program to provide hot meals and food supports to vulnerable population. Humaniti is also supporting the people of Yemen with food and emergency relief as they experience the worst humanitarian crisis since WWII.

Brother Firaaz is known for his great communication skills and he is inspired by the compassion and generosity of Canadians. But what often goes unnoticed is that soft Guyanese accent which he has somehow managed to keep after all these years in Canada. That voice along with his small salt and peppered beard brings a smile wherever you see or hear his voice. May Allah reward his efforts and grant his beloved father Jannatul Firdous, ameen.