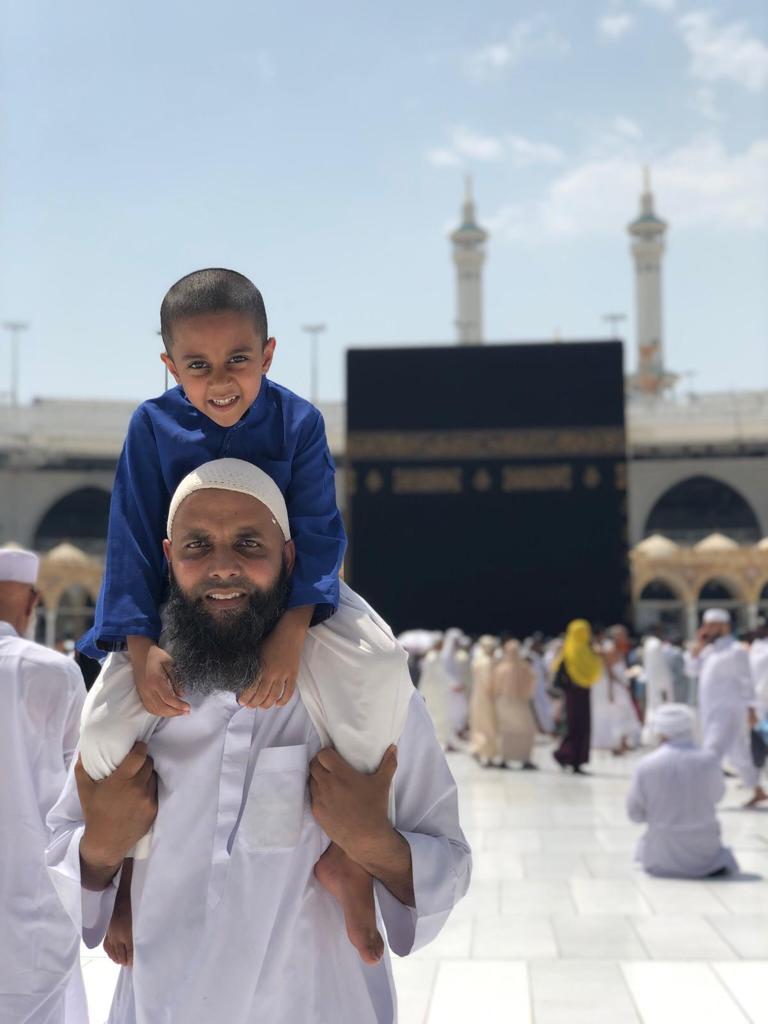 “The best among you is one who learns the Quran and teaches it to others.” – Narrated in Bukhari
“A strong believer is better and is more lovable to Allah than a weak believer, and it is good in everyone…” – Narrated in Muslim

Have you ever played basketball against that “guy” who has a never-ending motor? Who plays full-court press defense in every situation? Never stops talking trash (respectful trash :P)? And drops jays on you all night. As the game winds, down, it’s Salat time, and that same guy puts on a thobe and leads Maghrib Salat with beautiful qiraat like a boss? That was my first experience meeting Hafiz Esmail Shaikh.

Hafiz Esmail Shaikh and brother Hafiz Ibrahim have been a staple in the Thorncliffe Park/Flemingdon community for decades. Hafiz Esmail has been a game-changer, kind of like Steph Curry changing the NBA, and Khabib in the UFC. I’ve witnessed firsthand the impacts he has had on some of the most vulnerable youth and more importantly our community over decades. I interviewed a few of his current and past students, and even today as adults, with their own kids, making millions, they all sing the praises of how Hafiz Saab helped to define them and keep them out of trouble. Hafiz Saab’s formula is simple; he connects the youth to the Quran and he spends time and respects them.

Before I get into the impacts Hafiz Esmail has had, let’s take it back to the beginning. Hafiz Esmail was born and raised in Thorncliffe. He went through the same path as many of us, elementary, middle and high school. What defined Hafiz Saab was the commitment, dedication, and resilience of his parents. Back in the day, there weren’t hundreds of makhtabs, Hifz classes, or even Alim’s in general. From the age of 9 to 13, Hafiz Esmail/Ibrahim were taught by none other than their respected mother. I write this humbly and respectfully, their mother was not a trained Hafizah or Alimah, she didn’t have any teaching experience, but out of sheer love and devotion for the Quran, and by the grace of Allah, both brothers were able to become Hafiz under her eye. Alhamdulillah. Hafiz Saab’s father was a giant as well, known to many as National Dairywala, he has a man of discipline and structure. My attempt to encapsulate the impact of Hafiz Saab’s parents in this one paragraph, will not do justice to the amount of work and effort they have put in. By age 14, both brothers were leading Taraweeh prayers. By my research, the Shaikh brothers were the first Canadian-born Huffaz to complete their Hifz in Canada. Talk about history. In addition to being exceptional from a young age, Hafiz Saab had the typical hobbies as most. He was heavy into sports, going out in Jamat and hanging with the boys.

From 2000 to 2007 Hafiz Esmail was a Hifz teacher in California. I had an opportunity to speak to one of his former students in Cali, and even now after almost two decades, he was welling with emotions talking about Hafiz Esmail. As the former student explains: “Hafiz Esmail came in and was different from the previous ustaads, and the old methods. Hafiz Saab connected with the youth, and this was a time and place that the Cali community was facing real struggles of gangs, violence, substance abuse and lack of knowledge of deen. From the first class that Hafiz Saab taught, he spoke to the students almost as peers. Hafiz Saab took occupied the youth, took them to Oakland A’s games, and kept them busy with sports.” The brother commented how the strongest memory he has is Hafiz saab taking the class to watch a baseball game. First, which Ustaad did that before, and how Hafiz Saab led salaat outside the stadium. Hafiz Saab taught them that no matter what they did, or where they went, Salaat wasn’t to be missed. That was the students’ first experience that being a Muslim and living in Canada/USA is one and the same. It wasn’t about being Muslim only in the Masjid and maktab, but it was being Muslim always. Toronto Hifz Academy (THA)

The Toronto Hifz Academy started in 2013 with 8 part-time students. Hafiz Saab was grappling with an idea for years to start a full-time program that also catered to the social aspects of the youth. During a trip to Wonderland with his students, while standing in line he asked the students if they would be interested in starting full-time. At that time Hafiz Saab had a lucrative job with IBM. The students all agreed and the rest is history. Currently, the THA has 135 students enrolled. There have been 56 graduates. There is a sister’s Hafizah program and Arabic classes as well.

Hafiz Esmail is the founder and principal of the THA in Thorncliffe Park. Trying to pigeonhole Hafiz Saab to just principal wouldn’t do him justice. Hafiz Saab has been and is a mentor, a psychiatrist, an entrepreneur, a handyman, a guidance counselor, a teammate, a parent, a brother, a friend, pretty much every role you can think of. Hafiz Saab was and is more than just a teacher; for many, he is a second father. Hafiz Saab has the fikar (care) of ensuring that the youth in the community find the Straight Path. Hafiz Saab has helped students get jobs, from creating a resume and cover letter, and prepping for job interviews. Hafiz Saab pushed students to study in post-secondary institutions and get into stable careers. Hafiz Saab made maktab fun, he arranged camping trips, sports tournaments, Raptors games, escape rooms, lunches, dinners whatever you can think of fun, Hafiz Saab planned it to keep the youths engaged. And these events weren’t a one and done, this is done with consistency. Don’t believe me, check out their IG. Graduates from the Academy drop in regularly and connect with the current classes. The previous students become mentors for the current youngsters. The culture is of a true Onebrotherhood. There are no factions in our cliques you see elsewhere like Gujrati/Pakistani/Afghan/Sri Lankan. At the Hifz Academy, everyone is just united and it is a truly remarkable sight. MashAllah.

“Growing up in Tpark most of us didn’t come from financial privilege. Some of us didn’t wander past the signal lights of Tpark. Hafiz Saab us took us to umrah, took us camping, took us to Raptors games; he made us feel like we belonged and part of a brotherhood. Hafiz Saab spent time with us, he talked to us, he listened to us and he never judged us through our mistakes.” There’s something’s money can’t buy. – former Hafiz class graduateI sat down with a few of the students at THA, and they shared some remarkable stories. I wish I could share these stories to encapsulate the love, brotherhood, and impact. A couple of highlights: A Toronto Hifz Academy graduate met me after Taraweeh and shared his journey to Hafiz Esmail. He reminisced as he got into high school he wasn’t a remarkable student in school and didn’t even attend makhtab initially. A couple brothers at the THA started telling the now Hafiz to come to join them at madresah. They told him it wasn’t just madresah, that it was fun and they watch Raptors games. So, one day he took them up on the offer and came to THA. You know the amazing part of this story? This Hafiz at the time couldn’t read Quran, he was still learning the Arabic alphabet. From that journey in Grade 9, within 3 years by the Grace of Allah, the hard work of both teacher and student, he became Hafiz of the Quran. SubhanAllah. In his own words, he started his Hifz before he had completed 1 full parah of nazerah. But it was just the way Hafiz Saab connected with and shared the beauty of the Quran. He says the way Hafiz Saab acted, the way he spoke, was captivating. He said he just wanted to be like him. But, additionally, it was the extra love and time Hafiz Esmail put in with him. He remembers 12-14 hours a day he would spend at times, but Hafiz Saab was always there to motivate him and keep him moving forward. So many times, he felt like quitting but Hafiz Saab had been there and seen that so many times, he knew how to handle the situation.

There is no secret formula or hidden agenda, Hafiz Saab has said that no matter the situation or the problem the youth are facing, he always makes them turn to the Quran. The relationship that Hafiz Esmail has with all the students is through the connection of the Quran. And that love that they all have for the Quran has made his students seek his advice for all matters. If there is a small trivial problem, to huge life-altering issues, Hafiz Saab is available. Day or night, Hafiz Saab is available by text, WhatsApp or phone call. Hafiz Saab has challenged me and said, he will never be too busy to answer a phone call. He knows the importance of being there for others. His students tell me that Hafiz Saab makes it a point to check in on his past and current students periodically. He will call and invite them to come to meet him, no matter if they were in Madresah for a month or a decade, that bond is there for a lifetime.

Hafiz Saab has seen it all in recent years and there is a real struggle youth in our community are facing. From helping students with drugs/alcohol abuse, suicidal thoughts, issues of sex, sexuality, family/domestic issues, Hafiz Esmail is there and willing to help. In addition to the local work in the community, Hafiz Saab has helped initiate many Masaajids in Mexico. His students have also completed ‘co-op’ terms leading Taraweeh in Mexico. Hafiz Saab has instituted an iftar program in Mexico and the Philippines to support Muslims in need. And that is just the tip of the iceberg of the humanitarian work. Hafiz Saab engages his students to participate and makes them aware of the current climate.

Again, my words and ESL writing skills will not do justice to the work that Hafiz Saab has put in and is currently putting in daily. Hafiz Esmail is in his prime and he is out there daily putting in immense work within the community. I humbly ask, that we support his work, and make dua Allah ﷻ preserve him and allow him to continue the work with ikhlas.

Please take the time to visit and support the Toronto Hifz Academy. First, we request your duas and financial contributions are always welcome.
https://torontohifzacademy.com/