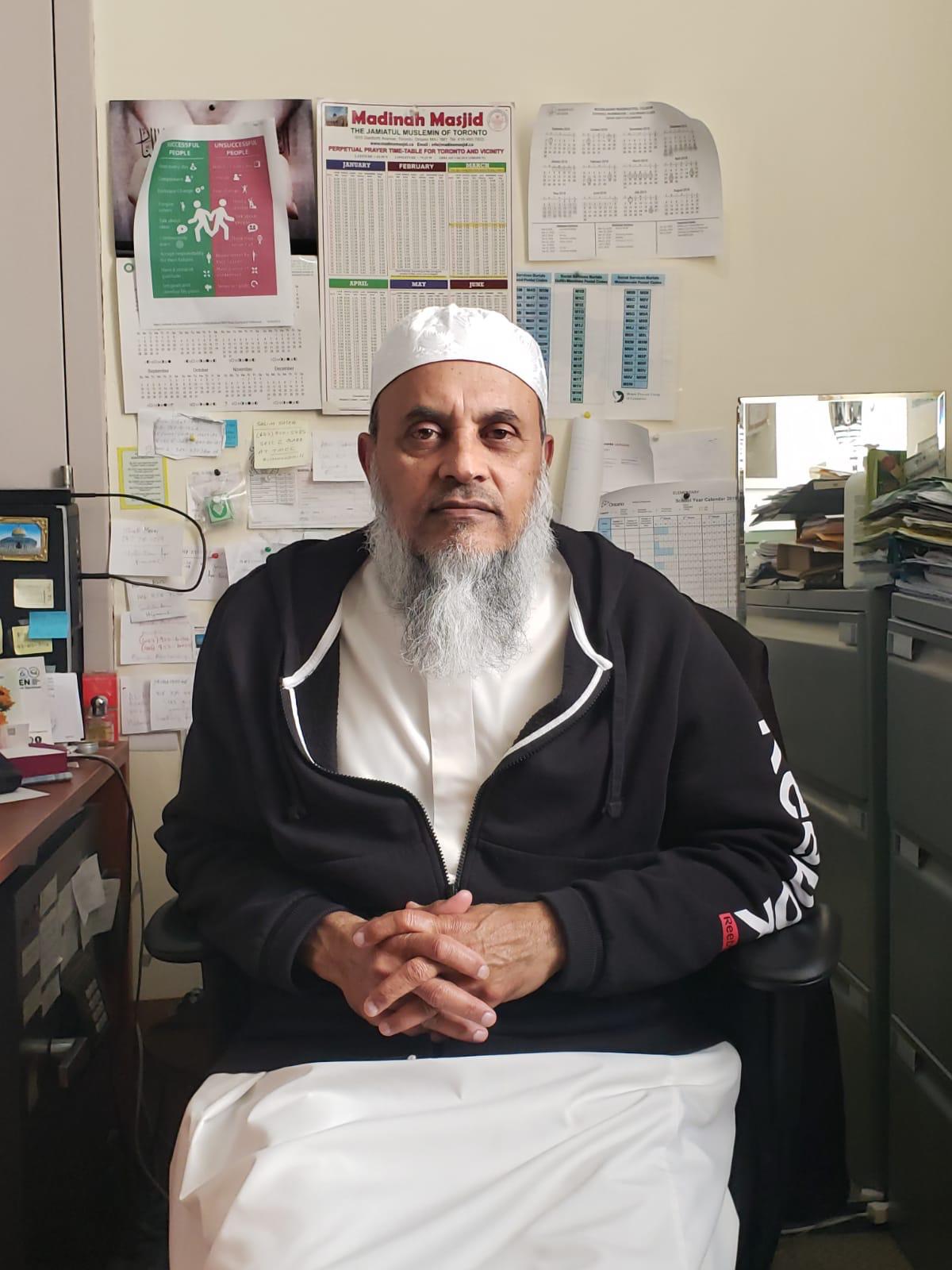 All drivers out here will know that the engine is the heart of your car. Hidden away in a compact part of the hood, the engine gives the power and thrusts the car which in turn, fulfills its duties. In Madinah Masjid, underneath the glamourous dome and colourful pillars, hidden away in the room that’s known as the office is the engine aka the heart of the Masjid Community. His name is Moulana Shiraz.

Moulana Shiraz Mohammed was born in a town near Georgetown, Guyana. He will forever be known as Toronto’s Undertaker. For the past 33 years, he served as a teacher and later the Funeral Director of Madinah Masjid, he has performed well over 2000 funerals. Chances are that if you live in Toronto, you know of someone whose body was cleaned and buried by Ml Shiraz. There was also a time where a professor from Waterloo approached Moulana and asked him to make a Kafan (burial shroud) for someone and told him that “This Kafan needs to be a means of dawah and I can’t tell you who it’s for but you’ll find out in a week.” A week later Moulana saw the professor on TV and realized that the Kafan he made was for Muhammad Ali.

At the age of 18, Moulana Shiraz wasn’t the “best” practicing Muslim, but it all changed when he bumped into tabligh jamaat. His journey started in Guyana where he was approached by members of the tabligh jamaat who encouraged him and his friends to pursue Hafiz and Alim courses in India. Moulana Shiraz agreed and soon began his journey with no money or an idea of where this would take him. He simply said Bismillah and started his expedition for the sake of Allah.

Moulana made his way to India and went to the ijtima in Rander. Qari Saleh Patel heard that a group of students came to India to study and he recruited them to Darul-Uloom Falahe Darain in Tadkeshwar. At the time, Moulana was 18 years old and was advised to start Alim class by one of his current colleague’s father, Marhoom Moulana Ismail Desai. To most, 18 years of age would be considered late but 8 years later, Moulana finished his journey and Alhumdulillah finished his studies and completed his Alim course.

Upon completion of his course, Moulana stopped in Canada and during Ijtima, many of his friends advised him to stay. But Moulana didn’t know what his next step was so he went home to see his family. The second time Moulana stopped in Canada was for Ijtima again but this time he decided to get married in Canada and stay here. Marhoom Moulana Khalil D.B, one of the pillars of Madinah Masjid and the biggest Ulema in Canada, and Marhoom Suleman Parekh got word of this Moulana who could speak English and can relate to the community and the youth, Madinah Masjid did not hesitate and jumped on the opportunity and offered him a position at the Masjid. He started off working as the Deputy Imam and taught Madresah. He mostly worked on Saturdays, led Fajr on the weekdays, and taught Madresah in the evenings. In the beginning, there wasn’t much work for Moulana so he decided to learn how to drive a school bus while also attending George Brown College to obtain a degree in Business.

In 1996, Marhoom Faruk Desai secretary of Madinah Masjid offered him a full-time position where he would then become the Funeral Director at Madinah Masjid while also taking on more administration responsibilities. Moulana was thrilled because this allowed him to work in the masjid environment and he wanted nothing more than that. He also self-taught himself Quickbooks so he can help with the accounting work at the Masjid. His friend whom he had gone to College with got a job in the government and pushed Moulana to do the same. But the humble man that Moulana is, explained to his friend that “I see people who go to work having to wear shirt and pants and come to the Masjid who rush their salaah and have no time for sunnahs. I am happy in the Masjid; the pay does not matter. To be in the environment of the Masjid is more than enough for me where I can take my time in ibadah.”

To say the least, he is well known for taking care of funerals in a professional and punctual manner which is why so many people continue to come to Moulana. Alhumdulilah, Moulana overcame his struggles and he thanks Allah for blessing him with Sabr and as he says common sense. He understands people and has a unique ability to sympathize with others through times of grief and emotional distress. Moulana preached the importance of this because this is how you build connections with people and help families go through tough times. It takes a lot out of a person doing what Moulana does but he never complains even if he receives a call at 1 am in the morning or on his day off. The amazing thing about Moulana is his humility and his understanding of what he is doing for the sake of Allah. Even if Moulana is sick or in pain, it does not matter he’s always there to do his job. There is a saying that “the bath of Madinah Masjid is a bath to die for”. People love him and the service he provides while doing it at one of the lowest prices in all of Toronto. The truth is that the standard he has bought for this job will never be matched as Moulana Shiraz goes above and beyond in everything he does.

To do a job for 33 years with such patience and humility is something that only you and I can dream of. He wouldn’t have been able to do what he does without the love and support of his wife and kids. They sacrificed their time with Moulana so he can be at the masjid. Moulana said his wife was there for him the most when he needed someone. Behind every great man is a great woman.

Moulana Shiraz shared with us a few examples of his work ethic. He explained since 1988 he has only taken 2 sick days, one of which was for day surgery. For the past few years, he has been working on Sundays, which is his day off. He is on call; he can get called in the middle of the night for burials and he has never declined and most importantly he NEVER complained. Compare his work ethic to ours, how often do we complain or call in sick, would ever come into work on your day off?

As mentioned above, money is not the reason he is so motivated to do what he does. There were times when Moulana was offered jobs where he could double his pay + receive health benefits but he always says that his job is the best job in the world. Moulana preaches to those who do work for the Masjid that “we don’t receive health benefits working in this environment, we’ll receive benefits in the Akhriah. Your intention to teach, shouldn’t be for the salary. I am happy with the mosque along with the work I am doing as a religious scholar as well and I love the work that I do.” This tells us a lot about the man he is and his perspective on life. The truth is that the standard he has brought to this job will never be matched.

His advice to people in the community and to those who want to learn about conducting funerals:

“This job is not only a job. It’s a service and it takes a lot of courage, Alhumdulillah. Understanding the deen gives you the ability to be strong and knowing that the dead body can do you no harm, your imagination is what scares you. Washing the dead bodies requires a lot of bravery but there is honour and reward to do it for the sake of Allah. It must be someone who wants to do it with the intention of khidmat and wanting to receive the rewards from Allah. The Janazah itself, if there is no one to do it, the whole community becomes sinful. It is a responsibility and if you take the responsibility upon yourself there is a lot of ajar (rewards) in it. There is humility in this work and it is important to be humble, patient, and having wisdom when dealing with grieving families. The reason why Allah SWT has given me a pennyworth of respect is because there are many ways one can deal with people the key thing is to show respect so that they will give you respect. That is something that I always try to do and it worked out because Allah SWT gave me the respect due to that.”

Moulana Shiraz is a man who wears many hats, he leads funeral services, he provides nikkah services, he leads prayers, helped start the Islamic school, and changed the scope of how Madresah is run in Madinah Masjid today. He has taught us so many lessons both on Deen and in life. He’s the one person we can depend on if we have any problems or issues. He’s the one person we can turn to without feeling judged, he’s a mentor and a counsellor of ours. He’s one of the brightest gems and one of the most underappreciated and undervalued people in the community. Our Masjid and community would not be the same without him, he has done so much for us and we are grateful that Allah SWT chose him and blessed us with his presence and placed him in our community. Alhumdulillah, when you think of Madinah Masjid there are two people that come to mind, Marhoom Moulana Khalil R.A and Moulana Shiraz. Moulana Shiraz has done so much, not only for the masjid but for communities in all of GTA. When people speak about him they speak with so much respect and never have anything but good things to say. We make dua that Allah ﷻ accepts his efforts and the efforts of all our respected teachers. May Allah ﷻ preserve our teachers, grant us love, patience, unity and allow us to fulfill our obligations. Ameen