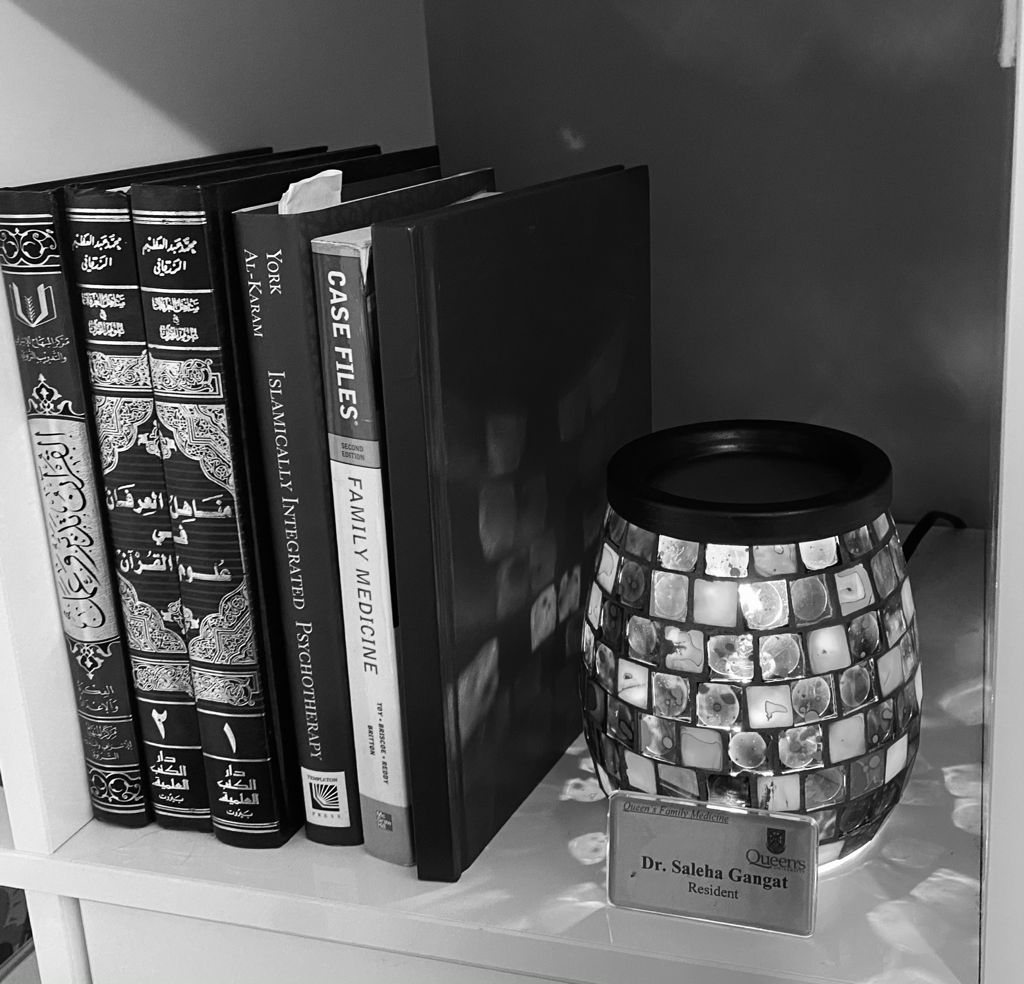 Shaykha Dr. Saleha Gangat has pursued many titles in life; as a Hafiza, Alimah, teacher of Islamic sciences, general practitioner, psychotherapist, and mother, she serves as an inspiration and role model for young women. You may have heard of her from the powerful and inspiring lectures she gives to Muslim women during various conferences across the GTA, such as Pearls of Paradise, Path to Piety, and Being Me. Her accomplishments in Islamic and academic studies make her a unique individual, and she gives back by imparting knowledge and advice to young Muslim women.

Currently, Shaykha Dr. Saleha Gangat integrates her Islamic and medical studies by working as a general practitioner in Hamilton and as a psychotherapist out of Khalil Centre. She and her sisters started an organization called Al Fatiha Learning to provide advanced Islamic learning to women through various Quran, Tajweed, and diploma programs.

Shaykha Dr. Saleha Gangat grew up in the suburbs of Montreal, Quebec, in the early 80s. As a young Muslim girl growing up in Montreal, she struggled over questions of identity. Her parents wanted her and her siblings to gain a strong knowledge of Islam, and her grandfather wanted her to learn Quran with Tajweed. So at 12 years old, she went to India, where she enrolled in one of the first cohorts of students of Pannoli madrasah in Gujarat, her hometown where she studied under the guidance of late Qari Abdul Hameed Dhudha.

Shaykha Dr. Saleha Gangat describes her time in madrasah as a period of rigorous study, which consisted of studying from 5 in the morning until 10 at night. Her first and second years brought new challenges; cultural changes, language shocks, and adjustments to her health. However, she endured these challenges and fell in love with the atmosphere of madrasah and with her studies. She mentioned that the sacrifices her family made were pivotal for her success. This included giving up their business in Canada to move to India for the sake of supporting their children in their pursuit of Ilm.

In 2000, by the mercy of Allah, she graduated as an Alimah and Hafiza, after 8 continuous years of studying in India.
On returning to Canada, a new chapter of life began. The adjustment and reintegration were a challenge, especially with the coinciding timing of 9/11. There was immense work to be done in the Muslim community, and she acknowledged the importance of female scholarship, which pushed her past her comfort zones. As a driven individual, she partook this responsibility by teaching maktab, and teenage Muslim girls at masjids in Toronto, including Abubakr and Nugget masjid. To this day, you can hear her give powerful and inspiring lectures to Muslim women across the GTA.

Shaykha Dr. Saleha Gangat resumed her academic studies at an adult high school, but worked hard and displayed ambition after a long time away. Her pursuit of knowledge continued, and working with the girls at the masjid made her curious about psychology and human behaviours development identity. She completed her undergrad and obtained a degree in psychology and neuroscience at the University of Toronto Scarborough. Her hard work and excellence did not go unnoticed, and shortly after, she was accepted into McGill for medical school. Following medical school Shaykha Dr. Saleha Gangat finished up her residency at Queen’s University.

She quotes Imam Shafi’i (RAH), “knowledge is only of two types, the knowledge of religion or the knowledge of medicine.” This inspired her to study both Islam and biology and to integrate the two subjects. She found that one can bridge the gap between Islamic and academic studies while practicing their Deen. As well, her madrasah studies made her medical studies less daunting, as she was used to rigorous study, practice, and time management.

MashaAllah, Shaykha Dr. Saleha Gangat pursued all of these studies while also maintaining the responsibilities of motherhood. A mother to four, she says that managing her studies alongside raising her kids required dedication, discipline, and dua. These were her dreams, and she was willing to do all that it took to pursue them. While it wasn’t easy, she had her parents’ support. She didn’t have local role models at the time, but as a role model for today’s youth, she imparts some key lessons and advice. Time management was essential for working towards her goals, as was compartmentalizing different goals and paths in order to make time for everything.

Shaykha Saleha recognizes that the Muslim community needs compassionate and dedicated people to step up. She has valuable advice for young Muslim women; to be confident in their identity as a Muslim, because it has a lot to offer. Islam has given you honour. It’s important to accept and to be proud to be a Muslimah, because being a servant of Allah is a blessing. She also advises young moms that it’s important to prioritize different roles in one’s life and not feel the need to prove anything to anyone. She herself is inspired by her mother, who raised 14 younger siblings, brought her family to Canada, and worked extremely hard to help her family back home. Her father is also an inspiration for her as he started his journey of Hifz and Alimiyya after the age of 40, which taught her that learning is lifelong and not limited to any age.

May Allah allow us to learn from her example, and may He reward Shaykha Saleha and her parents for their sacrifices and continuous efforts. May Allah grant them Jannah, Ameen.